What don’t Scouts do? At this age, we encourage girls and boys to take responsibility for themselves and each other, with older members leading a small team. They like being with friends and participating fully in the adventure of life.

In the Troop Scouts:

The Scouting calendar has been full over the last year, but we did manage to squeeze in a Leadership and teamwork camp in September 2018. The camp was well attended by over 80 Scouts from all but one troop.

The Sunday was more of a fun day with a number of “Gladiator” events with the Explorers as the Gladiators and the Scouts as the contestants.

Scout sections in the district  remain strong with a good flow of Scouts moving up to Explorers and strong numbers of cubs moving up to the Scout sections. We have a record number of Scouts achieving the Chief Scouts gold award from all over the district, which is a clear indication of how well the leaders are doing with providing a varied and balanced program.

The troop nights that I have attended have always been well run with the Scouts fully enjoying the activities.

We have had a good number of new leaders joining the sections and I have been proud to award a number of wood badges.

The Scout sections in Farnham have continued to grow both in numbers of leaders and scouts,

There are currently 9 scout troops in the district with another one planning to start in September;

A large proportion of the district attended the Patrol Leader training weekend in November, and another on is planned for the start of October this year, this enables the scouts to earn their leadership and teamwork challenge awards.

Another 10 scouts have recently achieved their “Chief scouts Gold award” and will be attending the presentation ceremony in July.

34 scouts from four troops attended the district scout camp in May, and had a fun weekend of abseiling canoeing, shooting, rafting, crate stacking and bungee running.

In addition to this, Scouts have camped in all corners of the UK as well as in France,

In the last twelve months scouts have clocked up over 2,500 nights away.

Burnt enough wood to build a large family house and had more fun than we could ever imagine.

This year it has been a busy year for the scout section.

In June last year the District joined the county for Scoutabout, a wonderful Activity weekend camp at Ardingly in Sussex where 4500 scouts and guides plus leaders, had the opportunity of over 100 exciting activities from car Driving , caving, climbing, Dunk tank , meeting and making friends and shooting to name just a few. It started with a firework opening ceremony and a flag bearing closing ceremony. Such a wonderful fun filled weekend. My Thanks to the county team for the organizing of this event.

Our Troops all went to various parts of the country for their summer camps having a fun filled, varied programmes. Three of our troops joined the county Kix International camp in Switzerland. They joined over 320 scouts and leaders for this truly memorable event, from white water Rafting, High Ropes, Mountain walking, and joining the international campfire where I awarded 2 Gold Chief scouts awards to 2 of our scouts. Happy memories to treasure.

We ran our District PL’s and APL’s weekend at Bently Copse.

It was back to Nature and everyone one slept in Hammocks, some for the first time. We were blessed by good weather and with cooking on open fires and learning how to cook Pigeons and fish, Fun was had by all learning a lot about leadership. We did have the Badgers visiting the camp, resulting in a lost Ruck sack but was found in the valley. My Thanks goes to Scotty for the Hike he arranged and to all the leaders for their help.

Our District swimming badge was attended by many scouts and they were awarded their staged badges. Well done everyone

My Thanks goes out to all the leaders and helpers, of which without them Farnham couldn’t run such a wonderful, scouting programme and wishing the 5ths Group , who have just started their 3 troop, every success. 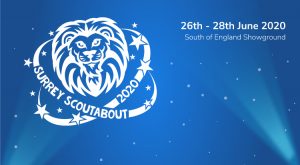 Scoutabout 2020 What is Scoutabout? Scoutabout is an extraordinary event that only happens once every three years – 5,000 Scouts and Guides aged between 10 and 14 from all over Surrey participating in a weekend of fun, learning and activities. Where is Surrey Scoutabout? At the South East of England Showground, Ardingly, West Sussex – the only[...]
View Calendar
Add

Wintercamp 2021Lots of activities to take part in over the weekend and the site will be up until 28th February 2021 - which means lots of session ideas.Wintercamp 2021 ... See MoreSee Less

Wintercamp 2021 Lots of activities to take part in over the weekend and the site will be up until 28th February 2021 – which means lots of session ideas. Wintercamp 2021
View on Facebook
· Share

We are back to Amber starting from the beginning of Wednesday 2nd December 2020;www.scouts.org.uk/volunteers/getting-back-together-safely/the-readiness-levels-across-uk-scouts/This means that F2F Scouting can resume subject to the restrictions which can be found in the link above an approved COVID RA. ... See MoreSee Less

We are back to Amber starting from the beginning of Wednesday 2nd December 2020; www.scouts.org.uk/volunteers/getting-back-together-safely/the-re
View on Facebook
· Share

SAVE & ACCEPT
Valid DBS?
Do you have a valid DBS? If you do then please carry on by clicking the Booking link below. However if you do not please ensure to update your DBS
DON'T KNOW?
CONTINUE TO BOOKING
×
District Group Information
Need more information on a group near you? We have information on all our groups on the web site to help you choose. Please just click on the SEE MORE
button below!!
SEE MORE ABOUT GROUPS
×
Family Camp 2020!
Hi everyone. Well it's getting close to the event of the year... THE FAMILY CAMP!! 24th - 26th April.
SEE YOU THERE!!
CLICK HERE
×