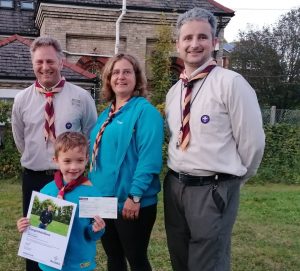 Alfie Lamport, aged 7 and a member of 11th Farnham Beavers Group has won a Chief Scouting Unsung Hero Award 2021 for telling daily jokes and making people smile throughout COVID-19 and especially during lockdown.

The Chief Scout’s Unsung Heroes Award is an annual scheme that recognises 20 Scouts aged 6-24 who have shown Scout values, courage, kindness and a ‘never give up spirit’. Scouts received over 300 nominations this year and Alfie Lamport was handpicked by Chief Scout, Bear Grylls to receive an award at The Bear Grylls Adventure, indoor and outdoor activity centre at The NEC Birmingham on 8 October 2021.

Alfie started telling daily jokes back in May 2020 for Mental Health Awareness Week and in doing so raised funds for Mind, however he didn’t stop there. Keen to keep on making people laugh he continued telling jokes every Friday with his #FabFriday jokes throughout the summer. He then, dressed as an elf, told daily #ChristmasCrackers throughout Advent and raised funds for his school, Badshot Lea Village Infant School. He now shares his humour on radio, every Friday on BBC Radio Surrey and in total has raised nearly a thousand pounds for charity just from telling jokes.

Austin Tolkien, 11th Farnham Beavers Group Leader said: “Alfie fully deserves this award and is an inspiration to others. The pandemic hasn’t been easy for any of us but Alfie’s dedication and enthusiasm to keep making people smile is never ending.”

Gemma Ball, Headteacher at Badshot Lea Village Infant School said: “Alfie is quite simply a little star! We are so proud of him and all his efforts to simply try and make people laugh and feel good by just telling one liners!”

Alfie Lamport said: “I was so shocked to win this award and to get to meet Chief Scout, Bear Grylls was amazing. I love telling my jokes and hope I can continue to brighten up everyone’s day by telling lots more.”

To hear Alfie’s jokes, you can search for ‘Alfie Lamport’ on YouTube https://youtu.be/6rvcIaxYdtYor listen to them live every Friday from 6pm on Joe Talbots show on BBC Radio Surrey.

This is nice to receive.Back in April at our District family camp this kids was in a complete panic the second the boat rocked a tiny bit as it entered the water but taking a little time on the bank with him while the rest of the volunteers covered me I was able to convince him to have a second go with me in the water 1-1 and an (unnecessary but he didn't know that) safety line attached to the boat, his parents at the time were very grateful as once he says no to something he never gives it another try normally.Sometimes you just have to approach the kids in a slightly different way.We have such a great team at Blackwater Valley Canoe Club that gives up so much time to make these things possible, this year we seemed to have a lot of 1-2-1s on the water with younger children (I remember 3 of us tied up on one of the sessions) just shows how together we gave them the confidence to try something they would have normally not even tried.Same thing happens on the other events too, especially the climbing Bill runs.Well done to everyone we broke our family camp record for people in the water this year too. ... See MoreSee Less

Thank you to everyone who came to our District AGM last Monday. I would like to thank the Executive Committee who have all re-stood as Trustees and committee
View on Facebook
· Share

What has been happening:Scoutabout - fantastic weekend nearly 5000 people on site; well done and thank you to all our volunteers without who our 130 Scouts could not have had the wonderful experience and opportunity. Particular shout out for Oscar (5th) for helping co-ordinate including sorting the transport, Sam (2nd) for hiring the van and picking up all the equipment and especially Sarah ( ... See MoreSee Less

What has been happening: Scoutabout - fantastic weekend nearly 5000 people on site; well done and thank you to all our volunteers without who our 130 Scouts
View on Facebook
· Share